The McMinnville AVA is contained within the Willamette Valley AVA, sitting in the Coast Range foothills just west of the city of McMinnville, approximately 40 miles (65 km) southwest of Portland. Geologically, the most distinctive feature in this area is the Nestucca Formation, a 2,000-foot (610 m) thick bedrock formation that extends west of the city of McMinnville to the slopes of the Coast Range. This formation is weathered sedimentary and volcanic soil sitting on top of marine bedrock, which affects the region’s ground water composition, forcing vines to struggle and produce complex fruit.

Hyland is unique in the McMinnville due to its uniformity. The foothills of Oregon's Coast Range are charactistically varied. Hyland, on the other hand, is comprised of soley volcanic soil. It's elevation and protection and sandwiched location between two valleys  isolated it from geological events. This uniformity is gives the in the ultimate interaction between vine, aspect, and climate.

Compared to surrounding areas, McMinnville is, on average, cooler and drier, consisting of higher elevation vineyards (up to 1,000 feet (305 m)) that are resistant to frost. Vineyards situated on the more southerly facing sites take advantage of the cooling winds from the Van Duzer Corridor, a break in the Coast Range that allows cool Pacific Ocean air to flow through, thus dropping evening temperatures in the region, which helps to keep grapes retain their acidity as they ripen. 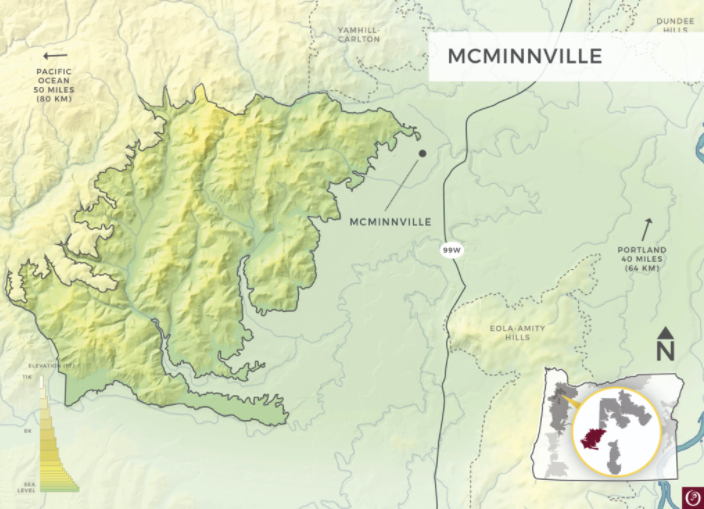